The cauliflower is a neglected vegetable. Underneath its extensive leafy wrappings, it’s small, mild, and delicate: so why is it so often over-looked? Often inseparable from the memory of bland school-dinner cauliflower cheese, or an over-boiled, tasteless mess, cauliflower has suffered harshly in our hands.

So I decided to breathe some fresh life into my own use of this plant. As it has no particularly distinct flavour of its own, I thought the cauliflower would lend itself well to a curry: and this one from BBC GoodFood appealed to me with its range of spices. I added a few fistfuls of fresh spinach, and used plum tomatoes in place of tinned, to use up the sad-looking remnants of last week’s shop. Parboiling the potato and cauliflower beforehand significantly reduced the cooking time.

The overall result was a satisfying and healthy dinner. The lemon gave the ginger and chilli sauce a lift, and the combination of cauliflower and potato left me feeling happily full. 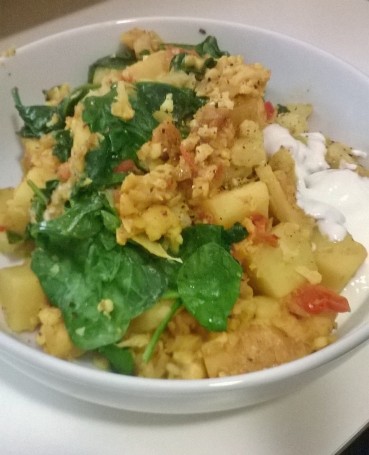 To serve one, you’ll need:

Unclothe the cauliflower (how else can I put this?), and chop the inner vegetable in half. Roughly dice the potato. Blanch the two together for five minutes in boiling water.

Finely chop the onion, garlic, chilli, and ginger. Heat a lug of oil in a pan, and gently cook the onions until soft. Add the spices all together and fry while you roughly chop the tomatoes, before putting in the pan with the drained cauliflower and potato.

Stir well to incorporate the vegetables, season with salt and pepper, then pop a lid on to simmer for around twenty-five minutes, or until the potato is soft.

Squeeze in a generous amount of lemon juice before dishing up: serve with coriander and natural yoghurt.

I’d love to know how this can be improved in terms of flavour: the potato and cauliflower, being a tad bland, are blank canvases to taste. It’s a dry curry, but perhaps a little sauce would add some real richness of flavour.

One thought on “Cauliflower, potato, and spinach curry”